Do You Play Poker?

Poker is a game of strategy and knowing when to bet and when to fold. While there are many games out there and even more variations of those games, we wanted to give you a rundown of the poker games we offer and tips for playing each game. We are also holding a promotion (Table Games Blowout) for all our table games where we are giving away more than $50,000 in cash and prizes and you can win up to $15,000 cash! 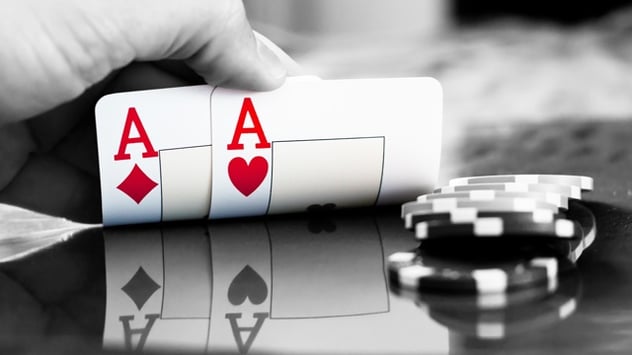 Made famous by the popularity of televised poker events and tournaments such as Poker Stars, World Series of Poker and the Heartland Poker Tournament, Texas Hold’em has made its way into tournaments, homes and casinos and has become the world’s most popular poker game.

The game is played when the dealer deals two cards (known as hole cards) to each player. Then, five community cards are dealt face-up on the board and all players bet based on the two cards they are holding and the five cards that are dealt to make the best five card hand they can.

This is where the table game version differs from the game you may be familiar with from poker rooms or even playing at home. Once each player has either bet or folded on their hole cards, the first set (3 cards) of community cards are dealt, known as “The Flop.” Another round of betting ensues and the next community card is dealt, called “The Turn.” Again, each player has the option to bet or fold.

A final community card, called “The River,” is dealt and a final round of betting occurs.  The dealer will then flip over their cards and will turn the cards from the community cards indicating to the players and caemras which cards are no longer in play for the dealer. Then, moving counter-clockwise, each player's hand is exposed and settled.

If you are interested in learning more about this game, please ask the dealer for assistance. Our Team Members are more than happy to explain the game and help you as you play. While they won’t tell you what to bet, they will help you understand the lingo and answer any questions you may have about the game.

Bonus Bet with a flush or better

Three Card Poker is a relatively new poker game, its creation being credited to Derek Webb in England in the mid 1990’s. In this poker game the players bet against the house and not each other. Three Card Poker is two games in one, played with a 52 card deck and there are three ways to bet – Ante (a bet that the player’s hand will beat the dealer), A Play (a wager equal to the Ante and made after the cards are dealt) or the player can fold, which forfeits the Ante.

Here is a break-down of the hands:

High Card: three cards of different ranks, not consecutive and not suited. The cards are compared and the high card wins.

Pair: two cards of equal number with the third card being a different number. If the pair of the player and dealer are the same the high card of the third card wins.

If you want to learn more about how to play 3 Card Poker, ask the dealers to help you out. Our friendly staff is trained to assist you in learning how to play our table games.

Pair Plus bonus bet with straight or better

Poker is a fun game that can be played against the dealer or simply about getting the best hand, but it’s all about strategy. We hope you have a better understanding of how to play Texas Hold’em, Three Card Poker and Let it Ride. To learn more about our Table Games Promotion click here.