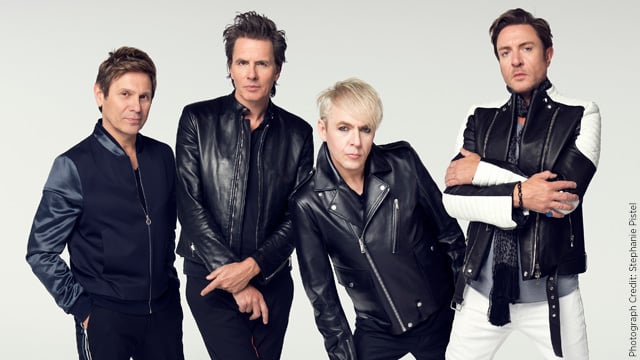 The 1980’s are synonymous with wild hairdos, outrageous outfits, iconic music and MTV so who better depicts that era than legendary English rockers Duran Duran? The have been rocking the stage since 1978 when the band was formed and named for the villain in Roger Vadim’s science-fiction film, Barbarella.

The band has always been an innovator in music - from being among the first on MTV to using video in their live shows. They also worked with fashion designers to create a sharp and elegant image which only increased their teen idol status and often gracing the pages and covers of teen magazines like Tiger Beat. In its 30 year history the band has never disbanded but, rather evolved including changes to the line-up and a reunion of the band’s original five members.

Duran Duran has been nominated for and won many awards from the American Music Awards®, Grammy Awards™, Q Awards, and more - including Favorite Group Video Artist Pop, Rock, Band, or Duo (nominated, 1985), Outstanding Contribution to Music (won, 2004), Best Music Video, short form for “Girls On Film” and “Hungry Like a Wolf” (won, 1984) and the Lifetime Achievement Award (won, 2003). They have had 14 singles in the Top 10 of the UK singles chart, 21 in the Billboard Hot 100 and sold more than 100 million records.

Currently the band is working on a new album, Paper Gods, scheduled for a September release and former Red Hot Chili Peppers guitarist John Frusciante is working on the album with them.The band released this statement on their official website regarding the addition:

“We were holding this exciting news because we were hoping to give you full details when we announced, but as word has leaked out, catching us rather off guard, we wanted to confirm... yes it’s true, the extraordinarily talented John Frusciante has indeed been doing some work from his home base in California on our new album. The tracks have been going back and forth via the internet, and we are thrilled with the results. We are all such big fans of John's work and are honoured to have him adding his magic to the record! There are no current plans for John to tour with us, but his guitars sound incredible on the tracks. Hoping to have more news for you soon.”

If you loved them then, you'll love them now. Get your tickets and rock on!